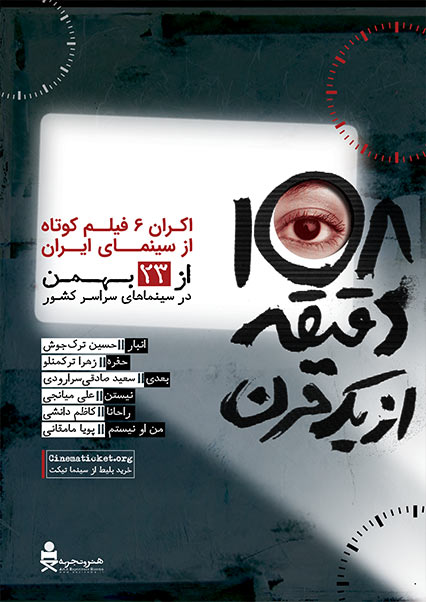 You can now buy tickets for the movie "108 minutes of a century" and watch this movie on your computer, tablet or mobile phone.

With the purchase of each ticket, a special code will be sent to you, and by entering that code and clicking on the "View" button on the "108 minutes of a century" screen, you can watch a movie during the screening.

108 minutes of a century

Store: It is the story of Afghan workers who have entered the country illegally and are working in a paper waste warehouse, until a murder takes place among them and they challenge everyone ...
Hole: A war soldier enters a war camp to collect booty, and inadvertently makes a mistake and provokes a negative dimension within it until
Next: The story of this film is about a photographer who shapes all his clients and takes pictures of them. But in the face of a customer, he has a problem
is not: A girl named Mojgan is doing her job to leave Iran and an old man named Rostam tries to keep Iran alive
Rahana: It is about the daughter of a Syrian sniper named Rahana who was able to kill a large number of ISIL forces ...
The role of Rahana in this film is played by Sadaf Espahbodi and Alireza Mehran - Pouria Ghasemipour - Mohsen Sadeghi - Ali Sangini - Abdolreza Ashtiani - Hossein Valizadeh
I am not him: Andre will be released from prison sooner than the end of his sentence for good behavior. His wife, Julia, contacted the prison to find out about his release. Eager to meet his wife, he prepares the house to welcome her.